A little while has past since I saw the Anthropocene exhibition at the Art Gallery of Ontario – AGO in Toronto, and it’s given me some time to reflect. Since then I’ve even gone back to the National Gallery of Canada to see their iteration of the exhibition again, read my review here! It’s hard not to compare and contrast the two approaches to the exhibition and its design since I studied curating in university so now going to exhibitions I find it really hard not to critic everything from wall colour, text panels and lighting to the overarching curatorial idea and artworks themselves. But it’s also rare that you get to see essentially the same exhibit done in two different ways. 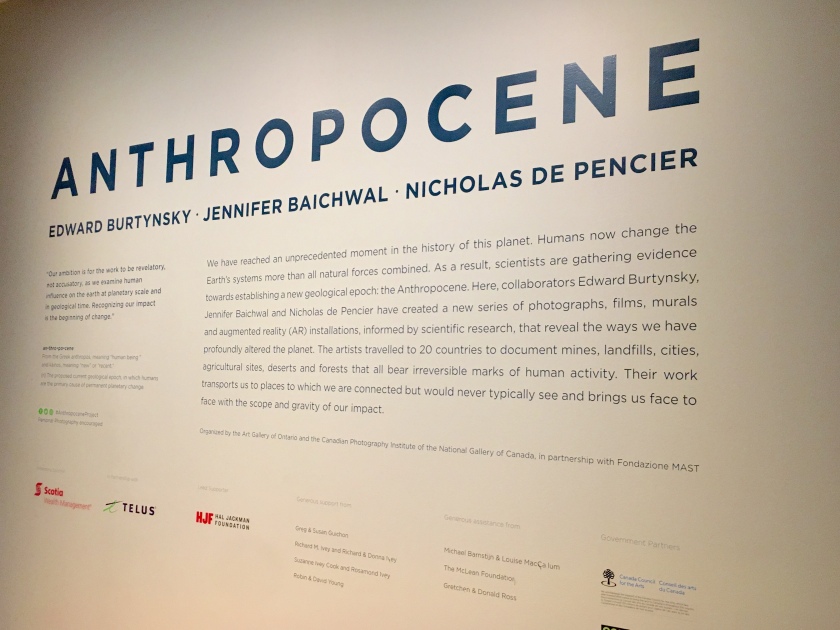 Before I get into my review and the (probably boring for most people) comparison of the two exhibitions, a bit of background information. Anthropocene is an exhibit about a proposed new geological epoch – Anthropocene, where humans are the primary cause of planetary change. It features works by a collective of three contemporary artists, renowned Canadian photographer Edward Burtynsky and Emmy award-winning documentary filmmakers Jennifer Baichwal and Nicholas de Pencier who have been working on the multidisciplinary Anthropocene Project for a over a decade. The exhibition is being presented concurrently at the National Gallery of Canada in Ottawa and the Art Gallery of Ontario in Toronto. It includes photographic prints and high-definition murals by Burtynsky and film installations by Baichwal and de Pencier, as well as “augmented reality” installations by the trio.

Anthropocene in Toronto was very different from Anthropocene in Ottawa, even though many of the works in the Toronto exhibition were here in Ottawa as well. That being said the exhibitions were not the same. The version at the AGO was bigger, or at least it felt bigger but there were definitely more artworks. There were a number of photographs by Burtynsky that were not seen in Ottawa at the NGC and all the video installations by Baichwal and de Pencier were on view on individual screens, unlike in Ottawa where many of them were projected on a loop so you had to sit and watch for a while to see them all. Just focusing on the works themselves, a lot of what I wrote about in my initial review at the NGC holds true for me. Many of the photographs were visually stunning and very moving. The video installations were interesting and added depth to the exhibition, although some were less impactful then other, especially in at the AGO because they were displayed differently, but I’ll get into that in a minute. As for the “augmented reality” I still felt like it was cool and a good way for visitors to interact more with the exhibition but ultimately I felt that it was unsuccessful in many was and distracting. 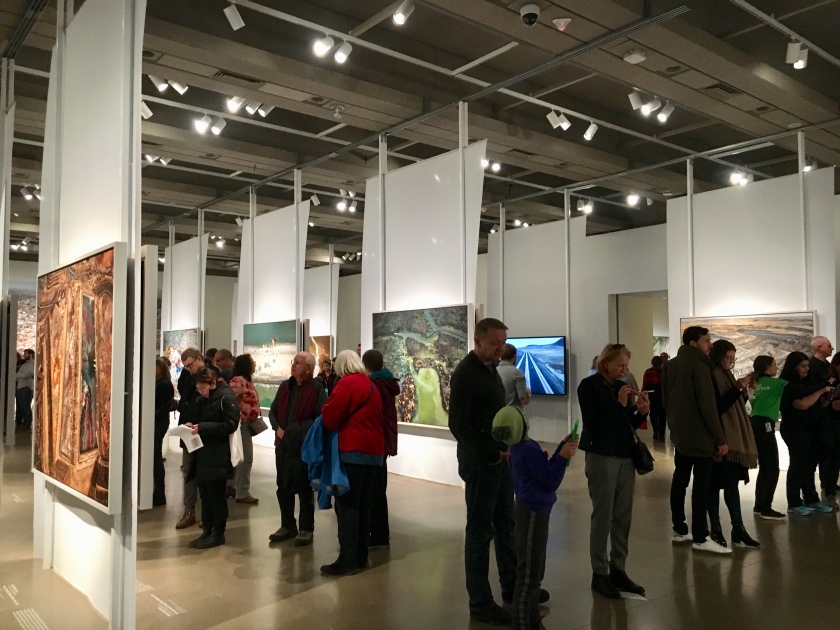 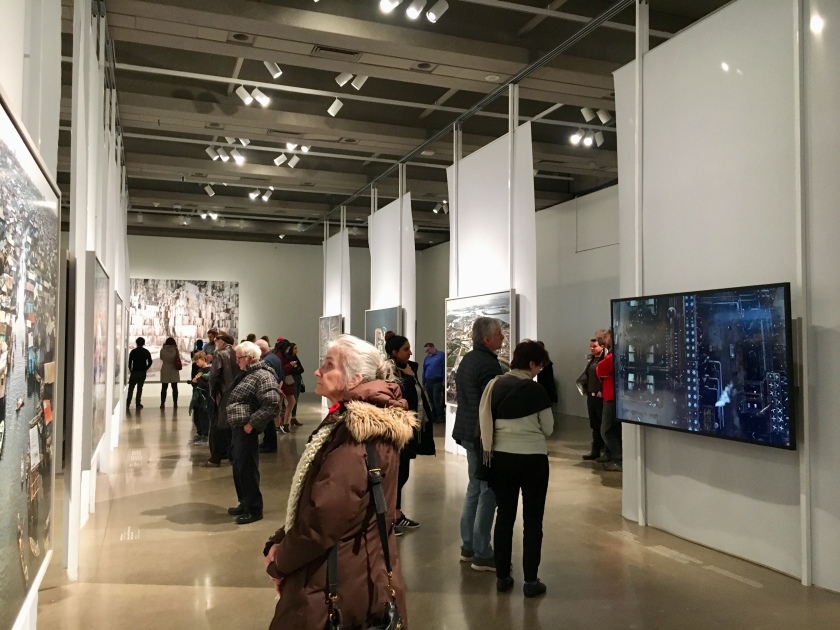 At the NGC the exhibition was curated and designed in a very typically gallery way with artworks along the walls that visitors easily follow along with around the room. At the AGO it was very different in terms of the exhibition design. The bulk of the photographs and many of the videos were displayed in the centre of the room in a way that allowed you to really see them in which ever order you want. I do like this more fluid approach that lets the visitor set their own path through the gallery but the actual execution was lacking. Rather than using temporary walls the AGO hung the artworks on mental poles with a white material in between that looked like vinyl to create the “wall”. By the time I was seeing the exhibition, a couple months after opening the material had started to curve so it didn’t look very good. Because of this mode of display there was no place for the extended labels on the “wall” so instead they were printed onto the concrete floor. It’s often hard enough to read text panels in a busy exhibition but having them on the floor was even more challenging. People either formed big circles around the artwork so you were too far away to read or people were actually standing on the text panels while taking a closer look at the artwork.

One of the things I disliked about the Ottawa exhibition was how the video and “augmented reality” works were integrated into the exhibition. Although I felt the videos in the Toronto exhibit were integrated much better with the photographs in the first main room, the augmented reality still didn’t work for me. The final room in the exhibition where a lot of the “augmented reality” was just seemed like a confusing mess of ideas since there were more photographs continuing from the first main room. The large coral reef mural photograph that I loved in the Ottawa iteration of the exhibit also had a companion video projected on the wall close by that acted as a nice complement (at the NGC this companion video was shown in the loop along with other videos). However, in between the two large pieces was the rhino “augment reality” installation that seems even more out of place in the Toronto exhibition. Unlike many of the other photographs and video pieces that you can make connections between the rhino seemed to be on it’s own, especially placed in between the coral reef artworks. On it’s own it seems out of context and even if it was placed closer to the elephant ivory pieces it would seem redundant. All the artworks about the elephant ivory were grouped together in this second large room but they felt less impactful than in Ottawa where the main video of the burning was in it’s own dark room and the other photograph and augmented reality installation where together on their own. Having everything together in one room with a lot of other ideas around made the compelling elephant ivory works less of a focal point resulting in them losing some of their impact for me since I had seen them before in Ottawa in a different setting.

One of the things that the AGO did that was interesting was show the image of the augmented reality rhino and pile of elephant ivory on monitors above the artworks so you can see it without using an iPad. This was nice for people that didn’t want to use the iPad or couldn’t because they were in use. The only drawback was that you weren’t able to walk around and see the rhino or pile of ivory for all sides since it was being displayed for you, but still a nice idea.

The “augmented reality” video seemed to be done differently in Toronto for the murals. When looking at the large photographs there were 3 markers on the ground and when you activated the “augmented reality” on the iPad it showed a different video at the 3 different markers. When I used the app on my phone in Ottawa it just showed one video. For example, the coral reef video that I thought worked really well just showed me coral bleaching at the NGC in Ottawa. In Toronto at the AGO it showed a clip of the coral bleaching at one of the activation spots, then a video of a sea turtle with the colourful coral and a video of fish at the other two activation spots. During my second visit to the Ottawa exhibition I noticed that the wall text of the artwork instructed you to activate those three different videos by standing in different spots and pointing the iPad at the mural. In Toronto this was very clear but it Ottawa it was easy to miss. 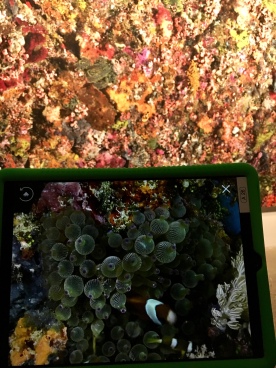 Before leaving the Anthropocene exhibition in Toronto you walked through a small room that helped to connect the ideas of the exhibit to the visitor’s everyday life with interactive tools and informative statistics and information. I thought this part was great and really added a personal touch to the exhibition to leave visitors thinking about the local and global impacts. The map featuring the different locations seen in the artworks and the real environmental impacts and what you can do was really interesting and informative. There was also a visitor poll that asked you how you felt about what you had seen in the exhibit (worried, sad, angry, informed, motivated, suspicious, concerned), which actually gives you an idea about the type of people visiting the gallery and seeing the exhibition. When I saw this interactive part of the exhibition I loved it and wished that Ottawa had done the same. Upon returning to see the exhibit in Ottawa I realized that they did have a similar area that I completely missed it since it was not at the end of the exhibit but rather close to the beginning in a tucked away room. The interactive room in Ottawa was different though and asked you questions to respond to like “how is our lifestyle harmful to the planet?”  I think the AGO did a much better job with final interactive area as it allowed visitors to connect with the ideas of the exhibition in different ways that were easily accessible.

Overall I enjoyed the Toronto exhibition but I liked the exhibition design much better in Ottawa at the NGC. However, the AGO did a better job in integrating the video installations and connecting with visitors at the end of the exhibition. Also how to use the “augmented reality” was much clearer at the AGO but as a result some of the artworks were less impactful because of how they were displayed, compared to how they were displayed at the NGC.

Anthropocene at the Art Gallery of Ontario in Toronto closed on January 6th so there is still some time to get out and see it! In Ottawa at the National Gallery of Canada it runs until February 24th.